With general House Bills out of the way, representatives began working on House Appropriations Bills, which will determine how much money is given to various state organizations.

The House was responsible for looking at the preliminary budgets of 51 state agencies, including the Departments of Transportation, Public Health, Medicaid and Public Safety. 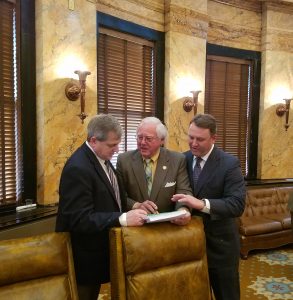 Budgets included reverse repealers, a clause which ensures that a bill cannot become law before going to a conference committee for further revisions. With reverse repealers in place, most appropriations bills were voted on in a block to help speed up the process.

Among these was House Bill 1592, the appropriations bill for the Mississippi Department of Education. During discussion for this bill, a conditional amendment was offered that would prevent MDE from receiving any money from the state budget unless the department removed its requirement for students to pass all end-of-course tests, commonly known as “exit exams.” The amendment passed the House by a voice vote.

The House Ways and Means committee also introduced several bills on the House floor this week.

Under House Bill 1550, recent college graduates could file for a tax deduction within one year of graduating from a four-year college or university. Those graduates would be entitled to this deduction for up to three consecutive years if they remain a resident and employee in the state of Mississippi, and an additional two years if they purchase property in the state for residential or commercial use.

Next week is the deadline for action on appropriations and revenue bills. After that, House committees will begin considering bills which passed through the Senate.

On Tuesday, the House recognized Tony Brown, Mississippi’s Gatorade Player of the Year in football. House Resolution 14 commended the senior running back from East Central High School in Jackson County for his accomplishments on the gridiron.

Several groups visited the Capitol this week, including medical students from the University of Mississippi Medical Center, the Mississippi Egg Marketing Board, the NAACP, Canopy Children’s Solution, the National Alliance of Mental Illness and the Women’s Foundation of Mississippi.